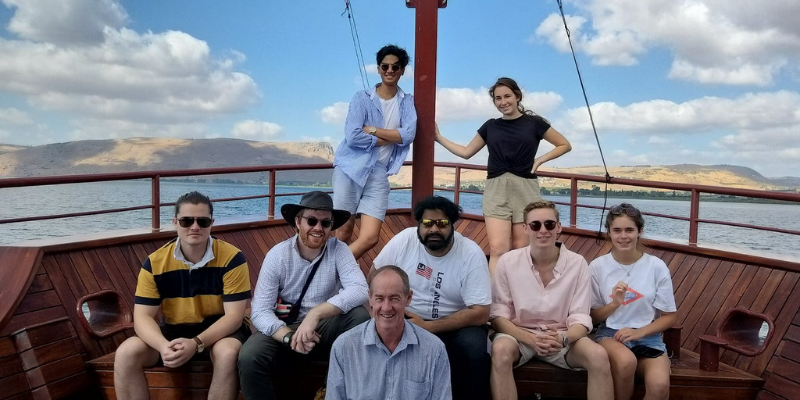 On the 6th of July, we arrived at Ben Gurion Airport, Israel. Treated like royalty, we were escorted through the airport by several security guards to rendezvous with Sherry Sufi, Chairman of the Western Australian Liberal Party Policy Committee. Following a cordial welcome by Sufi, we travelled to Jerusalem where he delivered an insightful overview of the history of Israel, the Jewish people, and the millennia of conflict that has occurred in the region. Following arrival in Jerusalem, we were introduced to several Western Australian Members of Parliament who we would have the privilege to tour alongside, including Kyron O’Donnell MLA; Ronald (Shane) Love MLA; and the Hon. Michael Mischin MLC. In addition, Teena McQueen, Vice-President of the Federal Liberal Party, would accompany us throughout the tour.

Our accommodation in Jerusalem was located adjacent to the Old City of Jerusalem (OCJ), one of the most historic places in human history. The OCJ is where the three Abrahamic religions collide: Judaism, Islam, and Christianity. It is the holiest city in Judaism and the spiritual homeland of the Jewish People for over 3000 years; a sacred site in Islamic tradition alongside Mecca and Medina; and one of the most important pilgrimage sights in Christianity where Jesus Christ was crucified and said to have been resurrected by God. Subsequently, our first full day in Israel encompassed a historical tour of the OCJ.

We visited the Jaffa Gate and David’s Castle, which has stood for centuries following Ottoman construction; the Western Wall, the most religious site in the world for the Jewish people; Al-Aqsa Mosque, the third most holy site in Islam; and the Church of the Holy Sepulchre, which was built on the location where Christ was crucified, and Jesus’s empty tomb, where he is said to have been buried and resurrected. Despite protracted tensions between the competing theologies, the city felt amicable.

The proceeding day began with breakfast alongside the Times of Israel Chief Correspondent, Haviv Rettig Gur, who presented an overview of the ongoing Israel-Palestine conflict. This was followed by a bus ride to Be’er Sheva to visit the ANZAC War Memorial commemorating the Battle of Beersheba of 1917. At this battle, Allied forces attacked and captured Ottoman and German forces at Be’er Sheva thus beginning the Southern Palestine Offensive of the Sinai and Palestine Campaign of World War I.

Moreover, it was the Australian Light Horse Regiments that conducted a mounted infantry charge that proved decisive in securing victory for the Allies. We then progressed to Sderot where we were briefed by Brigadier-General Eyal Hagbi, ex-Commander of the Israel Defence Force in Gaza. Gaza is Palestinian territory presently controlled by Hamas, an internationally recognised terrorist organisation which has vowed to destroy Israel.

Consequently, Hagbi disseminated information relating to the security challenges of the area and the key policies the Israeli government is implementing to secure the Gaza border. For instance, Israel is currently constructing a 65km underground border wall to block Hamas tunnels infiltrating Israeli territory.

We then proceeded to travel to a nearby Kibbutz (a collective community traditional to Israel based on agriculture) at Nahal Oz. Located only 600m from the Gaza border, and this Kibbutz is regularly confronted with rocket-fire from Hamas, which made our visitation a truly surreal experience. The day concluded with dinner alongside Emeritus Professor Meron Medzini, spokesperson for former Prime Minister Golda Meir. We examined many topics, including extant challenges confronting Israel, and Mier’s leadership during the Yom Kippur War of 1973.

The following day, we visited Yad Vashem, Israel’s official memorial to the victims of the Holocaust. Established in 1953 on the slopes of Mount Herzl, the memorial is dedicated to preserving the memory of the dead; honours Jews who fought against their Nazi oppressors; and studies the phenomenon of the Holocaust, with the aim to avoid such events in the future. It was an emotional experience, which further supplemented our knowledge of the atrocities committed under Nazism from our preceding Berlin expedition.

We then travelled to Tel Aviv to visit the headquarters of the Israel Space Agency. While there, we were addressed by Director-General Leo Vinovezky, who extrapolated upon the agencies history and the projects currently being undertaken. The agency was founded by Professor Yuval Ne’eman in 1983 and had four goals: first, to build satellite systems for space research; second, develop technologies and scientific infrastructure for space research; third, promote international cooperation in space research and exploration; and fourth, promote ties with Israeli society and space research. In April, Israel launched its first spacecraft to the Moon; however, it crashed upon landing.

The day closed by driving back to Jerusalem where we dined on delicious middle eastern cuisine and relaxed waiting for the coming days adventure.