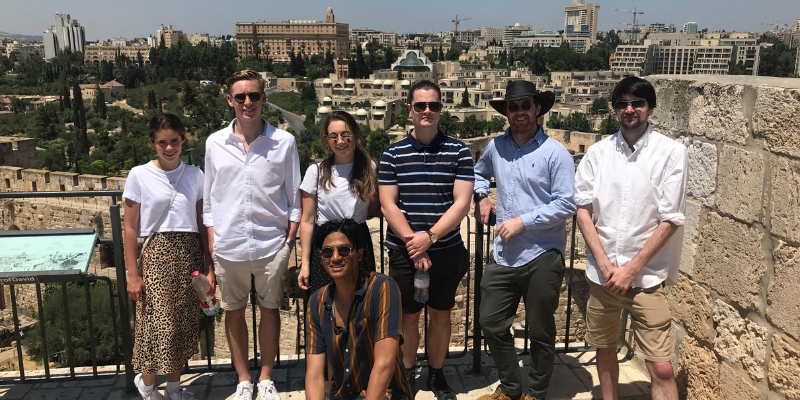 On the 10th of July, we adventured into East Jerusalem and the West Bank, which are Palestinian territories currently occupied by Israel. They were captured by Israel from Jordan following the Six-Day War of 1967; however, they have not been annexed. The juxtaposition between West and East Jerusalem was striking – East Jerusalem was decrepit and in need of restoration, whereas West Jerusalem is a vibrant first-world city. Our middle eastern experience was diving to new, exciting depths!

Whilst in East Jerusalem we met Xavier Abu Eid, Chief Negotiator for the Palestine Liberation Organisation. Certain members of our travelling contingent engaged in a fiery, yet interesting, conversation about the Israel-Palestine conflict. For example, Eid articulated that the Israeli controlled West Bank and Gaza regions were equivalent to apartheid and refused to apologise for suicide-bombers who have killed innocent Israeli citizens in the name of Palestinian sovereignty. That said, several arguments presented were compelling, and made our understanding of the Israel-Palestine conflict more convoluted. Israel must have its own state, yet Palestinian people also have an arguably equal claim to the same land, yet they do not have any sovereignty of said land. Furthermore, what land they do have is currently under Israeli control in the West Bank and Gaza. Our collective opinion is that a two-state solution appears to be the most viable option to resolve this situation. We encourage further reading into this conflict for those interested to learn more.

Moreover, we travelled deeper into the West Bank to the city of Rawabi – the first planned city built for and by Palestinians. It is set to be completed in the next few years and expects to accommodate up to 40,000 people. We were fortunate to have a discussion with Rawabi’s developer, Bashar al-Masri in his office overlooking the picturesque mountains on the horizon. Whilst there, we discussed the necessity of such an ambitious project with al-Masri conveying that Rawabi, once completed, will be pivotal in securing and facilitating a prosperous Palestinian state if one were to eventuate in the future. Furthermore, al-Masri was optimistic that a future Palestinian state would be prosperous because they could use the success of Israel as a blueprint. After Rawabi, we headed back to Jerusalem where we had dinner at the local markets followed by several drinks at a local bar.

The following day was brimming with activities and meetings. Firstly, we had breakfast with numerous political candidates for The Conservative Party in the United Kingdom. Most were sanguine of their chances for political success individually and for the party at the next election, which may be as soon as later this year. Afterwards, we departed Jerusalem for Tel Aviv where we were scheduled to stay one night. Our first activity in Tel Aviv was a meeting at the Australian Embassy in Israel where we analysed the Australia-Israel political relationship with Deputy Ambassador, Steven Yates.

In particular, we discussed trade policy between the two nations and whether Australia should move its embassy to Jerusalem. This was immediately succeeded with a briefing by Sharren Haskel, an Israeli member of the Knesset (Israeli Parliament) for the Likud, where she presented us an insider view of Israeli domestic and international politics. We then walked only a few hundred metres down the road for an enlightening disquisition by Paul Israel from the Australia-Israel Chamber of Commerce. The day concluded with dinner by Tel Aviv Beach where we received a speech from Ram Ben-Barak, former Mossad (Israel intelligence) operative, and current member of the Knesset for the Yesh Atid.

The next day encompassed travel to the Sea of Galilee where we were to reside for two nights. The Sea of Galilee is where Jesus Christ supposedly conducted many of his miracles, including walking on water, calming the storm and feeding of the 5,000.

On the way, we stopped at a Bedouin village where we had a delectable homemade lunch with the first Israeli Bedouin Diplomat, Ishmael Khaldi. Bedouin’s are historically nomadic Arab people, many of which are now urbanised, that have inhabited the desert regions in North Africa, the Arabian Peninsula and the Levant. The lunch was a delightful affair where we learned about the Bedouin-Israeli relationship, which is complicated, but congenial.

After lunch, we ventured to our accommodation situated right beside the Sea of Galilee – the views were astounding. However, we immediately proceeded further north to the town of Safed. In Safed, we were treated to a delicious Shabbat dinner with Rabbi David Friedman and his wife, Miriam. It was a phenomenal day filled with exquisite cuisine.