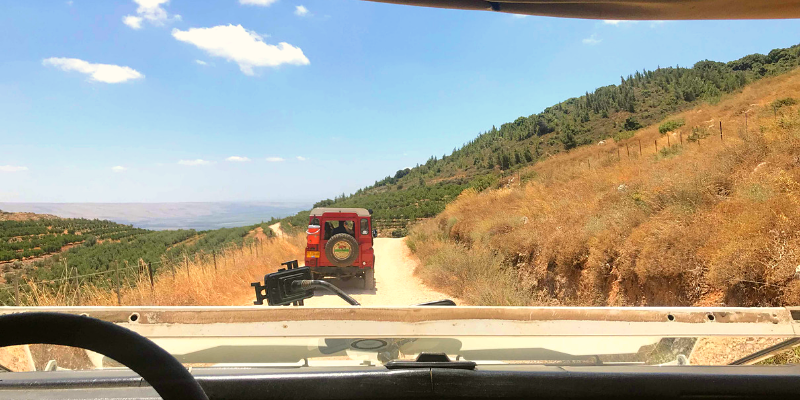 On the 13th of July, the day began with a spectacular boat tour of the Sea of Galilee. The waters were calm, and the breeze soft, as we absorbed the serenity of the surrounding environment.

Afterwards, we travelled to Metula, the most northern town of Israel. Metula is located on the border of Lebanon, and as we gazed across the border, we were able to see the flag of Hezbollah, an internationally recognized terrorist organisation which has significant influence over the Lebanese government. Hezbollah has ambitions to destroy Israel thus making Metula a precarious town to inhabit. As recently as December 2018, Hezbollah tunnels were discovered in Metula as part of a larger plan to infiltrate Israel; however, they have since been neutralised by the Israel Defence Force (IDF). Nonetheless, we participated in a Jeep tour of the Lebanese border, whilst learning about the pernicious Israel-Lebanese conflict, which began with the Arab-Israeli War of 1948.

More recently, the two nations were belligerents in the 2006 Lebanon War which precipitated from an act of terror where Hezbollah militants killed and captured several IDF personnel. Israel responded with heavy airstrikes, artillery fire, and a ground invasion of Southern Lebanon. The conflict ended several weeks later after a United Nations imposed ceasefire was agreed upon between Israel and Hezbollah.

After Metula, we journeyed east into the Golan Heights, Syrian territory occupied and settled by Israel following the Six-Day War of 1967. In early 2019, the United States became the first country to recognize Israeli sovereignty over the territory. We subsequently ventured to the Syrian border where we were able to see former Islamic State territory – a peculiar and uncanny experience. Furthermore, we learnt about the ongoing Syrian Civil War and Israel’s involvement. Although Israel’s official position is that of neutrality, they oppose Iran’s participation in the war (Iran has vowed to destroy Israel) and have consequently launched limited missile strikes to decrease Iranian influence in the region. In addition, Israel provided humanitarian aid from 2013 to 2018 as part of Operation Good Neighbour.

To conclude the day, we visited the Mount of Beatitudes on the northwestern shore of the Sea of Galilee. It is believed that this location was where Jesus Christ delivered the Sermon on the Mount. The Sermon is one of the most widely quoted elements of the Canonical Gospels.

The following day we travelled south along the border of Jordan. Along the way, we visited the third most holy site in the Christian faith, Al-Maghtas, which is supposedly the location of the baptism of Christ by John the Baptist. We then commuted further south along the Dead Sea to the ancient city of Masada.

Situated on top of an isolated rock plateau, Masada was built as a fortress and palace by Herod the Great between 37 and 31 BCE. From 73 to 74 CE, however, Masada was the locus where the Jews had their final stand against Roman forces during the First Jewish-Roman War. After a long siege, the Romans eventually breached the outer perimeters of Masada and were ready to conquer the city. Notwithstanding, the Jews committed mass suicide to avoid enslavement. Masada is today revered in modern Israel as a symbol of Jewish heroism. Ensuing Masada, we journeyed to the crystalline, salty shores of the Dead Sea. The water was so dense that we could comfortably float on the surface and even read a book! The day concluded with debarkation in Jerusalem and a sumptuous dinner at the markets.

Our last full day in Israel incorporated another trip into the West Bank to see the holy cities of Bethlehem and Hebron. Whilst in Bethlehem we visited the Church of Nativity which was commissioned by Constantine the Great in 330 CE on the site that is traditionally considered the birthplace of Christ. Afterwards, we travelled to the nearby city of Hebron, the largest city in the West Bank. Hebron is venerated by Jews, Christians and Muslims due to its association with Abraham. It is the location of the Cave of the Patriarchs, the burial caves where Abraham, his son Isaac, and Isaac’s son Jacob are entombed. Our last night in Israel comprised a relaxing dinner and reminiscence of the consummate times we had experienced in the holy land.

As of writing, our Israel adventure is now over, but our study tour continues onwards to our next destination – Tallinn, Estonia.